A brief (short) History of Halloween.

Halloween began with the Celts,  in Ireland, Scotland and England,with a celebration which they called Samhain, which celebrated the beginning of their new year, the end of the harvest (the collection of plants for food) and the beginning of winter. During this time they believed a bridge opened between the dead and the living.  They lit bonfires (big fires) to keep the spirits away. They dressed up in furs (animal skins) and animal heads and tried to predict the future year.

Later the Romans used the same dates to celebrate the feast of Pomona, the goddess of fruit and seeds, and another festival Parentalias which celebrated the passing of the dead.

In the 8th century the  Pope Gregorio III established All Saints Day, also known as All-hallows Day, on the 1st of November to honour the religious Saints.  This celebration included some of the traditions of Samhain.

The name Halloween comes from All Hallow’s Eve, which was the eve (day before) of All Saints Day, also known as All-hallow Day. All-Hallow’s eve was shortened and finally became Halloween.

A Ghoul is a spirit/ monster that eats the dead bodies from the graveyard.

Nowadays, in England, we have Halloween parties and dress up in costumes. We play traditional games like Bobbin’for apples which is trying to take an apple out of a barrel of water only using your mouth.

People make Jack-o-lanterns 🎃 from pumpkins and candles. Originally they were made from turnips. 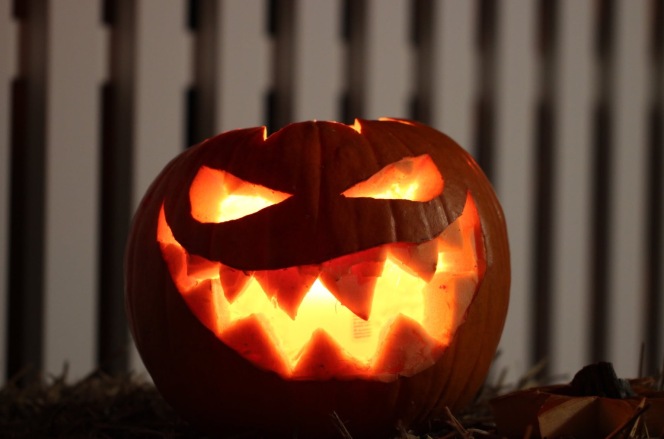 In the United States the children dress up in costumes and go house to house saying “Trick or Treat” and asking for treats- like sweets and candy. This traditional has become popular in England and more countries too.

A Magical tale with Augmented Reality.

And of course, a scary movie!

Whether or not you celebrate Halloween – Have a great week!

See you next week!

Hello, I'm Kim. I'm a qualified English ESL teacher with a CELTA A qualification and I have over 25 years of experience teaching English to non-native speakers. I love teaching! I also write about English, sing jazz, paint and make things.

Hello, I'm Kim. I'm a qualified English ESL teacher with a CELTA A qualification and I have over 25 years of experience teaching English to non-native speakers. I love teaching! I also write about English, sing jazz, paint and make things.